For the launch of our Liver-9-Line immunoblot test (to our press release “Liver Disease Diagnostics by Immunoblot” of May 16, 2011), I dug through a pile of literature on the topic of autoantibody-based diagnosis of autoimmune diseases of the liver. In the last week I picked it all up again and worked through it systematically. The interior surface of the liver. A reproduction of a lithograph plate from Gray’s Anatomy.

The reason for my renewed interest is that we brought four more ELISA tests for liver diagnostics to the market two weeks ago. They are the Anti-LKM-1, Anti-SLA, Anti-gp210, and Anti-Sp100 tests, all designed for fully automated autoimmune diagnosis with our Alegria system. All four test systems assist the formulation of a diagnosis when autoimmune hepatitis (AIH) and primary biliary cirrhosis (PBC) are suspected, or for differential diagnosis when another disorder of the liver is assumed.

Autoimmune diseases of the liver

The requirements for successful treatment of liver disease naturally include a precise diagnosis. As a result, unexplained elevated liver enzymes generally lead the treating physician on a complicated search for the source of the abnormally elevated liver values. In addition to anamnesis and clinical findings, laboratory tests and the correct interpretation of the laboratory results play a critical role in this process.

If the doctor is able to rule out alcohol abuse, drug-induced hepatitis, and viral hepatitis (for example hepatitis B, C, or D), and if nothing points to hemochromatosis, alpha-1-antitrypsin deficiency, or Wilson’s disease (also called: hepatolenticular degeneration), the most likely suspects remaining are autoimmune liver diseases.

In cases of autoimmune liver disease, the body loses its ability to tolerate its own hepatocellular or cholangiocellular tissues in the liver. The causes of these diseases remain a mystery.

When it comes to autoimmune diseases of the liver, there are essentially three conditions to differentiate:

Type 1 autoimmune hepatitis (type 1 AIH) is considered “classic” autoimmune hepatitis. This disorder mostly occurs in young women and is typically characterized by the presence of antinuclear antibodies (ANA) and/or anti-smooth muscle antibodies (ASMA, or: SMA), with F-actin generally acting as the target antigen. Autoantibodies against the soluble liver antigen/liver pancreas antigen (anti-SLA/LP antibodies) are often also detected. Depending on the study, this is the case in up to 25% of affected patients. 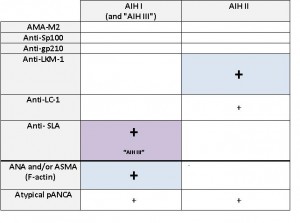 Primary biliary cirrhosis (PBC) is a chronic, progressive disease involving destruction of the small and intermediate bile ducts. It runs in families and is more common in women over 40 years of age. The diagnostic marker for PBC is detection of AMA, in particular AMA-M2. This test is complemented by the detection of anti-Sp100 and anti-gp210 autoantibodies. 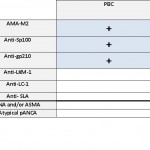 The autoantibodies typical of primary biliary cirrhosis (PBC) are: antimitochondrial antibodies (in particular AMA of subtype M2) and the antinuclear antibodies directed against the antigens sp100 and gp210.

Antibody diagnostics for cases of …

Depending on the test, antibodies against SLA/LP (SLA/LP = soluble liver antigen / liver pancreas) are found in up to 25% of serum samples from patients with type 1 AIH. These SLA-positive patients were previously considered to have a variant of the disease called “type 3 autoimmune hepatitis”; today they are included with the type 1 autoimmune hepatitis patients.

… and of primary biliary cirrhosis (PBC) …

Serologically, an elevated level of IgM is typical of the symptoms of primary biliary cirrhosis (PBC). In over 90% of affected individuals, antimitochondrial antibodies (AMA) are also detected, especially those of the AMA-M2 subtype. Especially for PBC patients whose serum test negative for AMA, complementary detection of autoantibodies against Sp100 and gp210, as well as the detection of anti-centromere antibodies, are of particular diagnostic importance.

… and of primary sclerosing cholangitis

In case of primary sclerosing cholangitis (PSC), no particular antibodies are known to offer useful information for the diagnosis of this autoimmune disease. However, in up to 90% of PSC patients, atypical pANCA (“xANCA”) are detected, a result that does provide the physician with an important indicator for making a diagnosis. Occasionally, antinuclear antibodies (ANA) and/or anti-smooth muscle antibodies (ASMA) may be detected in low titres. – Please note: antimitochondrial antibodies are always absent in cases of PSC!

The individual autoantibodies “in close-up”:

After ASMA, ANA are the most commonly detected autoantibodies in cases of type 1 AIH. Although ANA have no specificity for type 1 AIH, they are considered a marker antibody for this disease. For the majority of type 1 AIH patients (60%), ANA and ASMA are both detectable. Exclusively ANA (without ASMA) are found in 10-15% of patients with type 1 AIH; exclusively ASMA (without ANA) are found in 30-35% of patients with type 1 AIH. – Notice! In 20-40% of cases, ANA and ASMA are also quite frequently found in cases of type II chronic hepatitis C infection! 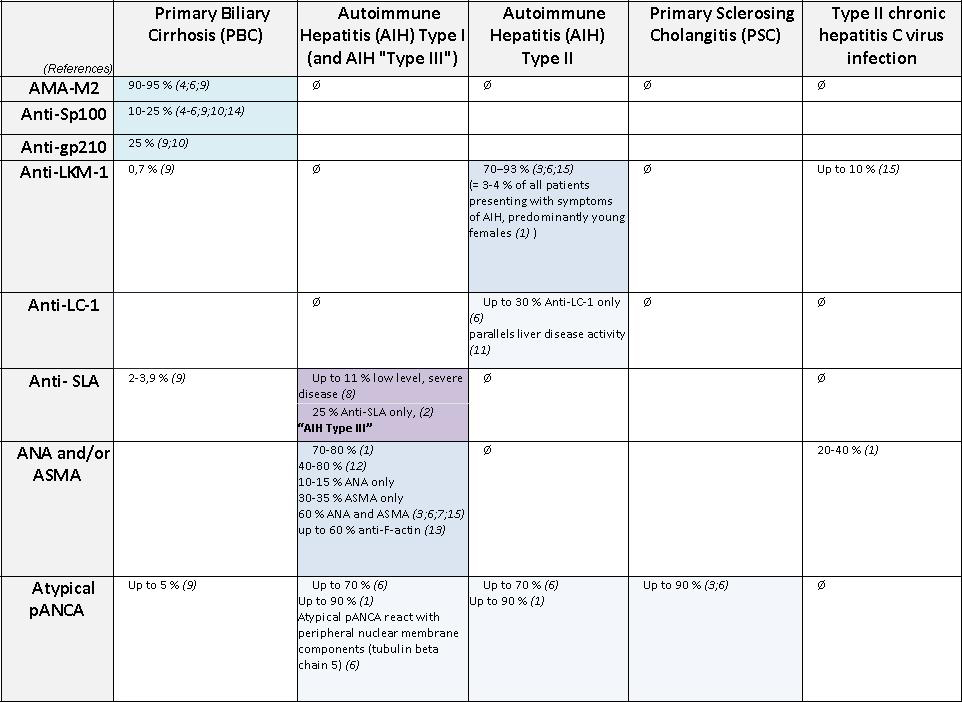 At high titres, anti-smooth muscle antibodies (abbreviated: ASMA) are considered to be marker antibodies and a recognized diagnostic criterion for type 1 autoimmune hepatitis. The relevant autoantigen is F-actin. Autoantibodies against F-actin can be separately detected with our Liver-9-Line immunoblot test.

The diagnostic sensitivity of ASMA detection is 80%, which means that a negative ASMA result does not completely exclude autoimmune hepatitis. ASMA are very often associated with antinuclear antibodies (ANA). The ASMA titre has limited correlation to the activity of the disease.

Antibodies against the SLA/LP autoantigen (the abbreviation stands for soluble liver antigen / liver pancreas antigen) are often detected in conjunction with ASMA or ANA (about 30% of anti-SLA positive serum samples also contain ASMA and/or ANA).

In patients who are assumed to have type 1 AIH, but test negative for ASMA or ANA (!), the individual detection of SLA/LP antibodies is particularly important for the formation of a diagnosis. In addition, SLA antibodies are indicative of a more severe progression of autoimmune disease. In addition to this, antibodies against the SLA/LP antigen are not detected in cases of viral hepatitis!

Antibodies to liver kidney microsomal type 1 (anti-LKM-1) are markers for type 2 autoimmune hepatitis. The detection of anti-LKM-1 antibodies also allows for the differentiation of type 2 AIH from type 1 AIH.

Anti-LC-1 antibodies (LC-1 stands for liver cytosol type 1) are detectable in nearly half of young patients with type 2 autoimmune hepatitis. Their appearance partially overlaps with the anti-LKM-1 autoantibody; about half of the patients who are anti-LKM-1 positive also have the LC-1 antibodies as a second marker of type 2 AIH. Each of these antibodies may also come up alone.

Antibodies against LC-1 are largely specific for type 2 AIH. They correlate better with disease activity than do anti-LKM-1 antibodies.

Antimitochondrial antibodies, AMA, act as marker antibodies for primary biliary cirrhosis (PBC). They are detected in 90-95% of cases and are primarily directed against the M2-antigen (AMA-M2). AMA have a predictive value for PBC.

However, AMA-M2 antibodies are also detected in one out of every five SLE patients (17-23%) and nearly one out of five patients with Sjögren’s syndrome (22%). They are also regularly found in patients with scleroderma (8-18%) and rheumatoid arthritis (10%). Presumably, these patients have a greater risk of developing primary biliary cirrhosis in addition to their existing autoimmune disease.

AMA detection: an AMA pattern in an immunofluorescence test is not always associated with PBC! A positive IFA should always be followed up with a separate AMA-M2 test. – Picture: antibodies against mitochondria (AMA-M2?), rat liver-kidney-stomach triple tissue by ORGENTEC Diagnostika. – © Barbara Fabian MSc, www.der-gruene-club.at

Antibodies to Sp100, directed against the multiple nuclear dots, a soluble nuclear protein of 100 kDa, have 95% specificity for primary biliary cirrhosis. These antibodies are detectable in up to 25% of patients with PBC.

Relatively often, in 48% of cases, Sp100 antibodies are detected among the PBC patients who are AMA-negative. Anti-Sp100 antibodies are only very rarely detected in patients with autoimmune hepatitis (AIH) and primary sclerosing cholangitis (PBC). Occasionally, these autoantibodies turn up in patients with rheumatic diseases (systemic lupus erythematosus, SLE: up to 10%, progressive systemic scleroderma, PSS: 5%, rheumatoid arthritis, RA: 3%, Sjögren’s syndrome, SS: 2%).

With a specificity of nearly 100% (!), anti-gp210 antibodies are highly specific to primary biliary cirrhosis (PBC). They are regularly found in samples from AMA-negative patients with clinically observed PBC (in 21-47% of cases, depending on test), which underlines the significance of anti-gp210 detection for the diagnosis of PBC.

They are very rarely found in patients with autoimmune hepatitis, rheumatoid arthritis, polymyositis/dermatomyositis, or Sjögren’s syndrome. Antibodies against the gp210 antigen are associated with extrahepatic manifestations, such as arthritis. They are a prognostic marker and are indicative of an unfavourable outcome of PBC.

In fact, ANCA detection for the diagnosis of primary sclerosing cholangitis is not specific. However, in some cases, an ANCA test may be helpful in the formation of a diagnosis when PSC is suspected.

You will find more references on the ORGENTEC website >> Literature Service

Pictures:
The interior surface of the liver: reproduction from Gray’s Anatomy taken from the Wikimedia Commons Project

The schemes are own work.