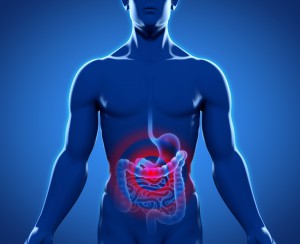 Differential diagnosis of bowel diseases can be challenging, because most of them present with similar common symptoms: abdominal pain and discomfort, diarrhea, weight loss. Infections by common gastrointestinal pathogens may soon be identified, but discrimination of inflammatory bowel disease, of which ulcerative colitis and Crohn’s disease are the most common, and irritable bowel syndrome, remains difficult.

Inflammatory bowel disease (IBD) is characterised by inflammation of the bowel, which is not seen in most patients with irritable bowel syndrome (IBS), and both conditions request different diagnostic and therapeutic approaches. IBD are serious diseases with severe comorbidities, and affected patients need further investigation with extensive diagnostic measures and intensive medical treatment. In contrast to that, IBS may be painful and impairs quality of life, but it does not usually cause serious morbidity. However, patients with IBS can have symptoms for many years and they often experience unnecessary and stressing diagnostic procedures.

Several studies have documented that testing for calprotectin in stool samples of affected patients may help to avoid unnecessary invasive diagnostic tests in people with irritable bowel syndrome and contribute to faster identification of patients suffering from inflammatory bowel disease who need intensive specialist care.

Lower bowel symptoms are very common in general practice. In most cases they are associated with irritable bowel syndrome. However, the symptoms can be caused by inflammatory bowel disease, which can lead to serious complications. Inflammatory bowel diseases (IBD) and irritable bowel syndrome (IBS) are presenting with similar symptoms, but they are totally different diseases. It is therefore important to distinguish IBD from IBS, so that each of the conditions can be appropriately managed and monitored. Patients with IBD need to be referred to a gastroenterology specialist for further investigation, who confirms the diagnosis of IBD by clinical evaluation and a combination of biochemical, endoscopic, radiological, histological, or nuclear medicine based examinations.

Initial laboratory investigations in common practice include full blood count, erythrocyte sedimentation rate, C-reactive protein and other tests. Erythrocyte sedimentation rate and C-reactive protein are the main markers used to measure intestinal inflammation. However, these tests can be influenced by non-intestinal diseases and can lack diagnostic accuracy. Moreover, while both tests indicate inflammation, they cannot localise it to the bowel. As a result, many IBS patients are referred for further invasive diagnostic tests involving endoscopy, which may not be needed.

According to the new NICE diagnostics guidance:

Calprotectin is a calcium- and zinc-binding protein that has antimicrobial properties and is ubiquitous throughout the body. The cytoplasm of polymorphonuclear granulocytes contains up to 60 % calprotectin. It is also found in trace concentrations in monocytes and macrophages. 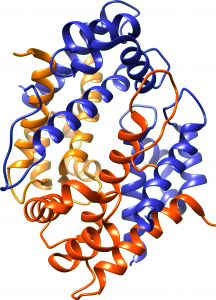 The faecal calprotectin level is a measure of inflammation-induced migration of granulocytes into the intestinal lumen and correlates directly with the intensity of the inflammatory reaction of the intestinal mucosa. Elevated levels of calprotectin in stool samples are found in patients with IBD, infectious gastroenteritis, necrotizing enterocolitis, allergic colitis, cystic fibrosis or colorectal carcinoma. Patients with celiac disease or with functional disorders like IBS have normal values of faecal calprotectin.

According to the NICE guidance, calprotectin test results need to be interpreted in the context of a cut-off value, below which the test is deemed negative and above which it is deemed positive.

A test result in the normal range (below 50 µg calprotectin / g stool) would support a diagnosis of IBS, a disease not characterised by inflammation.

A middle range is defined, where calprotectin levels are only slightly elevated, for classification of inflammation and monitoring of disease activity. A test result in the middle range, where calprotectin concentrations are slightly elevated, indicates a low level of inflammatory activity in the gastrointestinal tract. Repeated tests and further diagnostic measures are recommended.

IBS is a functional bowel disorder characterised by frequent bouts of bowel disturbance, abdominal pain and discomfort, and bloating. It may occur related to prior infection with gastrointestinal pathogens, but a clear cause has not yet been identified, no distinctive pathology is known and treatment is symptomatic. Dietary factors or stress may trigger exacerbations. Physiological studies often show an increase in bowel sensitivity, and the condition may be associated with abnormal muscle activity in the wall of the bowel. IBS can be painful, disrupt normal activities and reduce quality of life because of disturbed work and sleep, and anxiety. Symptoms of IBS can last for many years. It is troublesome , although it does not usually cause serious morbidity.

The NICE clinical guideline on irritable bowel syndrome in adults suggests a prevalence of between 10% and 20% in the general population. The true prevalence of IBS may be higher than estimated because many people with IBS symptoms do not seek medical advice. IBS most commonly affects people between the ages of 20 and 30 years and it is twice as common in women as in men. Recent evidence shows that there is also a significant prevalence of IBS in older people. The percentage of people with IBS is greater in adults than in children. Patients that meet the IBS diagnostic criteria should receive further laboratory tests to exclude other diagnoses, e.g. full blood count, erythrocyte sedimentation rate or plasma viscosity, C-reactive protein, and antibody testing for coeliac disease (anti-tissue transglutaminase antibody, anti-DGP or anti-endomysial antibodies). For more information see related blog post on celiac disaese diagnostics.

Distinction of irritable bowel syndrome from inflammatory bowel disease on clinical grounds alone is not always possible. Therefore, colonoscopy in specialist care is often performed to confirm the final diagnosis, an invasive and unpleasant procedure. Testing for calprotectin in stool samples is a non-invasive, reliable and simple method to detect intestinal inflammation. A negative test result for calprotectin supports the diagnosis of IBS as a non-inflammatory cause for the symptoms. When calprotectin measurements indicate a probably inflammatory cause of the symptoms, the next level of investigation should involve endoscopy and imaging.

The picture below illustrates a possible diagnostic algorithm for discrimination of IBS and IBD with non-invasive serologic tests: 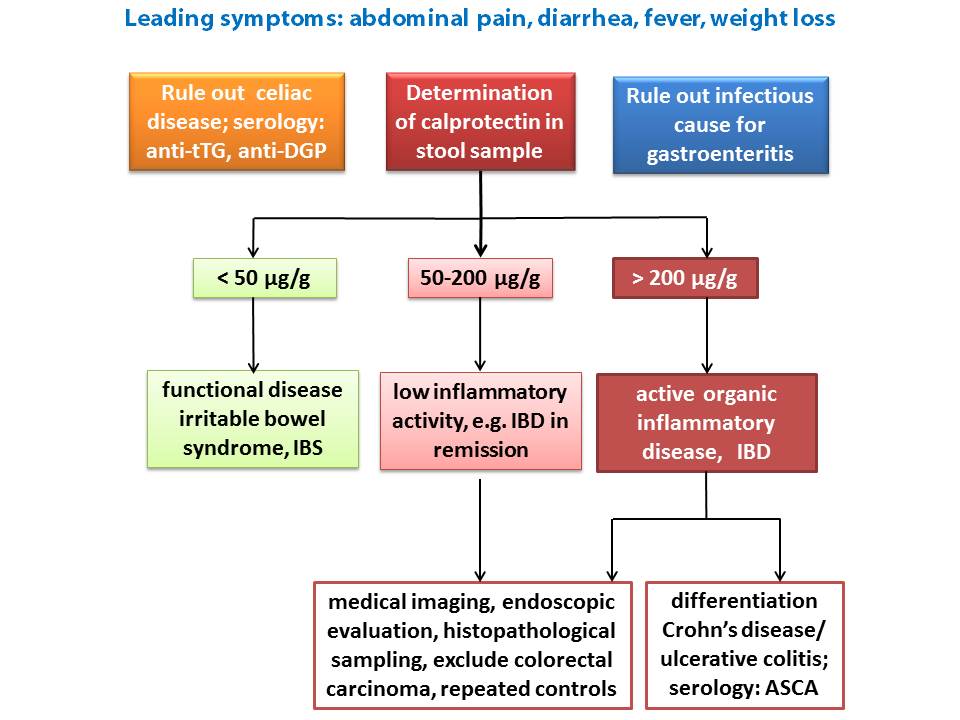 IBD, such as Crohn’s disease and ulcerative colitis are autoimmune conditions that involve inflammation of the gastrointestinal tract. These diseases can have serious complications, including a high risk of surgery. In both, ulcerative colitis and Crohn’s disease, some people have active disease but no symptoms. Typically, the diseases have a relapsing–remitting pattern with seemingly healthy, asymptomatic periods alternating with phases of severe inflammation.

Crohn’s disease and ulcerative colitis are chronic diseases that are associated with significant morbidity. They affect a person’s social and psychological wellbeing, particularly if they are poorly controlled. Patients affected with these inflammatory diseases need life-long intensive medical treatment. The invention of new biologic medications, such as anti-tumour necrosis factor, has offered the possibility to achieve mucosal healing, maintain remission and improve patients’ quality of life.