Rheumatoid factor (RF) is one of the best known serological markers in rheumatology – development of the test dates back into the 1940ies. Since this time the toolkit of serological diagnostic tests for rheumatoid arthritis (RA) has been complemented by the more specific anti-citrullinated protein antibody (ACPA) tests. However, none of the various ACPA tests has completly replaced RF until now. 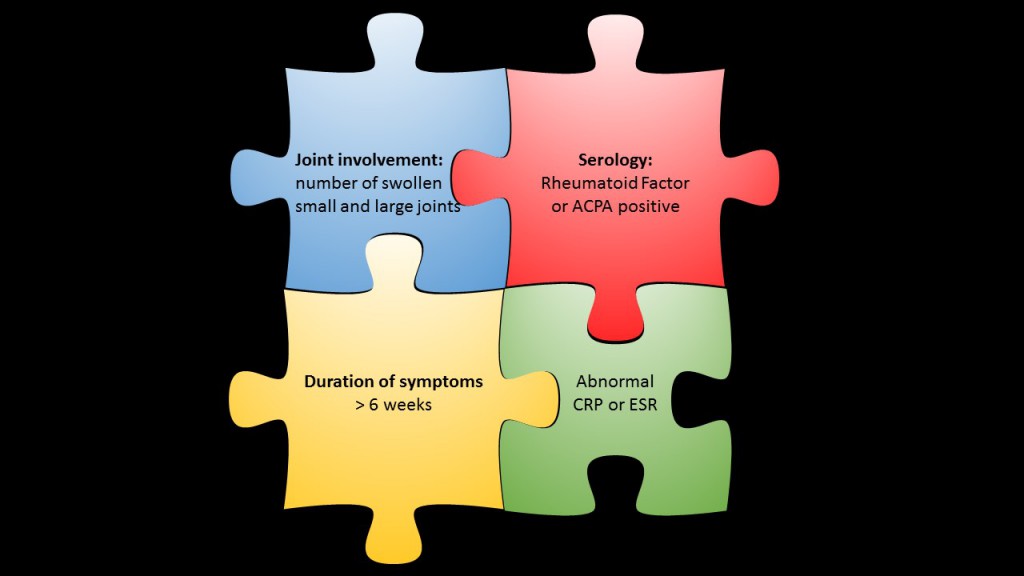 In contrast, the significance of RF has been further substantiated with the definition of the 2010 ACR criteria for classification of RA. Moreover, recent studies have shown the potential of RF as a contributor to disease pathogenesis.

Why do we still measure RF?

Serology is important for RA classification and supports clinical diagnosis. According to the 2010 criteria ACPA and RF analysis represent a major jigsaw piece for RA classification. The criteria define a scoring system attributed to the relative weight of the following parameters: joint involvement, serology, acute-phase reactants and symptom duration. A final score of six out of a maximum score of ten classifies RA [1].

ACPA and RF are considered as equivalent diagnostic markers; low titers of either ACPA or RF add two, high titers three points to the total score, – that is already half of the required six points for definite RA classification.

(For a short summary of the 2010 criteria read our post on   The 2010 ACR criteria for RA classification in brief  or see the scoring table published by the ACR.)

More than 70 years after its invention RF is still regarded as a valuable diagnostic marker for RA. Researchers are now addressing the challenging question whether RF and other autoantibodies in RA are only an epiphenomenon or real pathophysiological effectors that may interact synergistically to drive disease development.

RF and ACPA together upregulate the production of TNF-alpha

Jeremy Sokolove and his coworkers investigated the interaction of ACPA and RF, and its association with disease activity and inflammation [2]. They analyzed sera of 1488 US veterans with RA and compared measures of disease activity and serum levels of cytokines in ACPA+/RF+, ACPA+/RF-, ACPA-/RF+ and ACPA-/RF- individuals.

In addition, they stimulated macrophages with ACPA immune complexes in the presence or absence of IgM-RF, and analyzed the production of tumor necrosis factor alpha (TNF-alpha) as an indicator for macrophage activation.
Compared to the double negative subgroup, as well as to each single negative subgroup, the double positive subgroup of patients had higher disease activity and higher levels of C-reactive protein and inflammatory cytokines.
In vitro stimulation of macrophages with ACPA immune complexes increased cytokine synthesis in these cells. Addition of RF in the stimulation experiments further enhanced TNF-alpha production.

Taken together, these data suggest that ACPAs and IgM-RF act together in the pathogenic process of RA and induce cytokine production in macrophages. IgM-RF may boost the effect of ACPA immune complexes, indicating a mechanistic link by which RF enhances the pathogenicity of ACPA in RA.

Recent investigations have shown that autoantibodies against citrullinated vimentin isolated from RA patients induced bone resorption by osteoclasts in a cell culture assay (more details in our blog post summarizing the research article by U. Harre et al.).

Hanna van Steenbergen and colleagues analyzed the radiographic progression in RA patients stratified for ACPA and/or RF positivity. [5] They show that the presence of ACPA is associated with a more pronounced progression of structural damage when scoring conventional radiographs by the standardized Sharp–van der Heijde method. These findings confirm the relevance of ACPA in bone erosions and correspond to the high-resolution micro-CT data of Hecht et al.

In contrast to Hecht et al, van Steenbergen and her coworkers found no significant additive effect of RF and ACPA on radiographic progression. Limitations of conventional radiographs compared with high-resolution CT may explain this observation. Micro-CT technique has a resolution of about 100 µm and detects very small lesions with a volume of less than 1 mm³. Due to lower resolution and the limited 2D-representation, a substantial number of smaller erosions may escape the detection by conventional radiography, [6] but may be visible on 3-D reconstruction images of micro-CT scans.

Another important factor may additionally affect the results. ACPA and to an even greater extent RF titers decline in response to effective treatment. While Hecht et al analyzed sera from healthy people without any RA-medication, treatment had certainly been initiated in the patient cohorts examined by van Steenbergen et al. This may have cleared RF-immune complexes in these patients over time and leveled out the differences between the two groups of ACPA-positive RA patients. [7]

What is the appropriate detection method for RF?

Conventional semi-quantitative methods for the measurement of RF-IgM depend upon the agglutination of particles (e.g. latex, sheep erythrocytes) coated with human or animal IgG. The latex agglutination test is very sensitive, but it can result in a fairly high number of false positives. Nonspecific agglutination of latex particles by sera from normal individuals is not uncommon. Immunoassays and nephelometry/turbidimetry are quantitative serological tests with the advantage of objective instrument measurement.

Modern ELISA techniques are state of the art in every high performance laboratory. In contrast to nephelometry they allow for isotype characterization and more comprehensive in depth analysis. The sensitivity of ELISA for IgM RF may even exceed that of nephelometry or latex agglutination. [8] The availability of additional IgG and IgA RF assays has significantly improved the diagnostic specificity of the RF test. [9]

The table below gives an overview of the different established detection methods for RF. 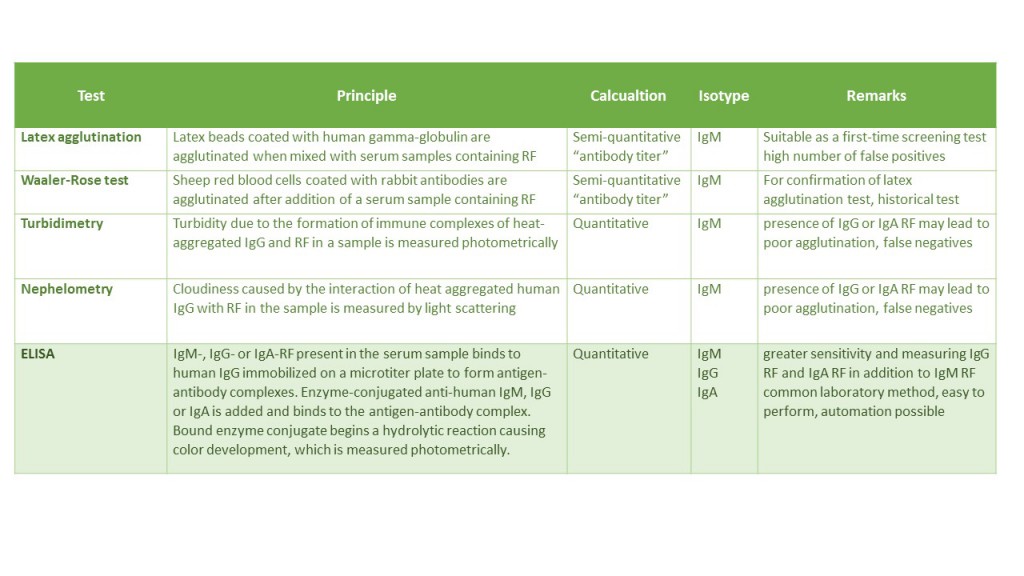 When RF isotype levels in RA patients are compared with radiological abnormalities of the joints, the strongest correlation is with raised levels of IgA RF. [10;11]

Literature from as early as 1984 suggests that the detection of IgA RF in early disease indicates poor prognosis and justifies a more aggressive therapy. [12;13]

Some studies have indicated that IgG RF correlates with disease status more closely than IgM RF. According to a study by Allen et al., raised levels of IgG RF are confined to the sera of patients with rheumatoid arthritis and not other arthritides. [15] 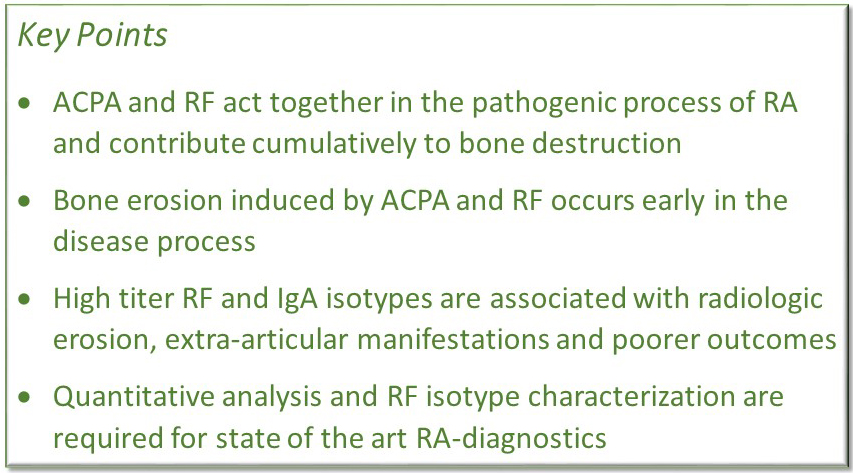 The most striking clinical association with IgG RF appears to be RA vasculitis. [16]

RF is more than a mere indicator for RA. Depending on the respective isotype, rheumatoid factors contribute to disease development, to the formation of extraarticular manifestations, and support the pathogenic process in the joint. Consequently, quantification and in-depth analysis of RF isotypes is required for improved RA diagnostics.